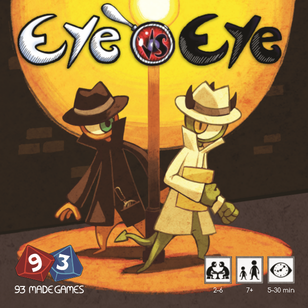 Eye vs Eye, the second set in the episodic Viewpoint card game series, finds the Blinkers separated on the espionage world of Spytopia.  Eyenstein and Iris must rescue Hawk who has been captured by his Spytopian counterpart.  Their problems escalate as they encounter Silas, Eyenstein's evil nemesis, who is trying to steal blueprints for a device that could transport the Blinkers home.  Join the Blinkers as they attempt to rescue Hawk and thwart Silas' evil plans.  If the Blinkers escape Spytopia, catch them in the next episode - Prehistoric Park.

Each Viewpoint set can be played as a standalone episode or mixed in any combination for a more thrilling adventure.
​
2-6 players. Ages 7 - Adult. 5-30 minutes.
Buy Now

AGENT π
The Blinkers first encounter Agent π on Spytopia.  Besides being a world-class spy, he is also a gifted mathematician and physicist.  He quickly understands the Blinkers' predicament and agrees to help them steal plans and equipment required to construct the Kaleidoscope, an inter-dimensional teleporter that could allow them to blink back to Myclopia.  His known aliases include: Erik Yuri, Kristyan Kornea and Iain A. Pieper.

SILAS
Silas is Eyenstein's nemesis and a competing professor at MEyeT University.  The catastrophic Cyclotron experiment also caused Silas and other Myclopians to blink around the Viewniverse.  Silas encounters the Blinkers on Spytopia while trying to steal the secret plans to the Kaleidoscope.  Silas cherishes Spike, his green-eyed pet.

SAPPHIRA
Sapphira is a shady spy who often poses as a fortune teller or a mystic to gather information and has ties to the mysterious group known as the Observers.  Iris, who is having visions of the future, approaches Sapphira for help in understanding them.  She has a significant bounty on her head and is being hunted by several Spytopians.

EAGLE
Eagle is Hawk’s trans-dimensional doppelganger from Spytopia.  He is a spy, private detective and bounty hunter.  Initially, he is sceptical of the Blinkers' story and the real reason behind his lookalike's existence.  However, he is encouraged by the Blinkers' offer to help capture a high-value bounty.
​