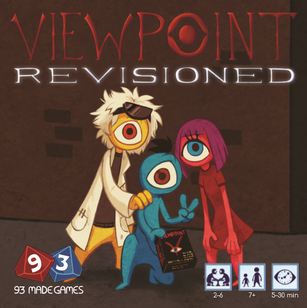 Viewpoint Revisioned, the first set in the episodic Viewpoint card game series, introduces players to the Blinkers as they are transported from Myclopia to the savage world of Triclopia.  Join the Blinkers on their adventure as they attempt to avoid a grisly end to their unplanned journey.  If the Blinkers escape Triclopia, catch them in the next episode - Eye vs Eye.

Each Viewpoint set can be played as a standalone episode or mixed in any combination for a more thrilling adventure.​

EYENSTEIN
Maximillian Eyenstein is a professor of optics, metaphysics and extragalactic astronomy at MEyeT University on Myclopia.  Prior to the disastrous Cyclotron experiment, which caused him and his companions to be stuck blinking around the Viewniverse, he was researching photonic influences on quantum particles and was on the verge of creating a new trans-photonic particle called a 'veutrino'.

IRIS
Iris is a doctoral student and laboratory assistant to Eyenstein and is studying quantum mechanics under his tutelage.  She believes that the occult, mysticism and the ethereal plane can be accessed from the physical Viewniverse using specific technology, which is what she is trying to prove with her doctoral thesis.  She begins seeing visions of the future after she starts blinking between dimensions.  She has been romantically involved with Hawk since they met on MEyeT campus.

HAWK
Hawk is a prodigious medical student at MEyeT University.  His cavalier practises and wild theories on ocular transplants and genetic replication have held him back from receiving full recognition by the medical fraternity.  However, he has the full support of his girlfriend, Iris, and is excited that they get to share their journey blinking around the Viewniverse.

SHADOW
A being of pure darkness created from one of Eyenstein’s experiments.  Even though Shadow has been "haunting" Eyenstein's laboratory for a few years, Eyenstein only recently became aware of the being's presence.

TRICLOPS
King of Triclopia.  He governs several tribes of savage, primitive three-eyed beings.  He is extremely hostile and distrustful of outsiders after "observers" from another world caused a massive drought on Triclopia.​
​