Viewniverse is an episodic remastering of the original Viewpoint series of card games – Viewpoint (2009) and Viewpoint Reflections (2011).  In the tradition of its predecessor, the cards and rules in Viewpoint Revisioned are quirkily based on theme of vision and provide absorbing experiences for all types of gamers from causal gamers to dedicated gamers.  However, Viewniverse amplifies these experiences by introducing full characterisation, new artwork and graphic design, series-wide themes and new mechanics combined into a new multiset card game series; with each set representing an episode in the adventures of the Viewniverse characters.
​
The first two Viewniverse episodes – Viewpoint Revisioned and Eye vs Eye – will re-acquaint gamers with the pun-filled hilarity of the original game whilst introducing them to a whole new Viewniverse to explore.  The next two episodes will stretch the boundaries of game design by melding traditional ‘take that’-style gaming with a level-up gaming system in Prehistoric Park and edge-of-your-seat adventure gaming in The Winking Dead.  Just like the original game, all Viewniverse sets can be played on their own or combined for even more shenanigans, with every two episodes connected via storyline, thematically and/or mechanically.

Click on the images below to find out about each episode or visit the official Viewniverse website for more details! 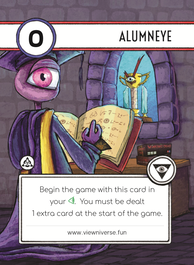 The Viewniverse is an expansive world inhabited by all kinds of unique beings.  You may see some of these enigmas pop up from time-to-time in your journey through the Viewniverse - Alumneye, Guardian of the Galaxeye, Mother Lizardtooth and Master of the Viewniverse.  You'll be able to identify them by their special 3-lobed loop icon.  If you're lucky enough to come across them, you may use them in any Viewpoint game you play (even classic Viewpoint!).  Simply follows these rules: