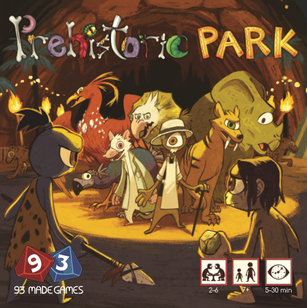 Prehistoric Park, the third set in the episodic Viewpoint card game series, transports the Blinkers to Menagerie, a world that is in the midst of a power struggle between the nefarious Doctor Crichton, a geneticist who has been creating peculiar creatures, and the rebellious Neandeyethal, one of Doctor Crichton's creations.  Join the Blinkers as they are forced to pick a side whilst avoiding being eaten by the inhabitants of Menagerie.  If the Blinkers escape Menagerie, catch them in the next episode - The Winking Dead.

Each Viewpoint set can be played as a standalone episode or mixed in any combination for a more thrilling adventure.​
​
2-6 players. Ages 7 - Adult. 5-30 minutes.
Buy Now

DOCTOR CRICHTON
Doctor Crichton is a sinister geneticist who is creating new species of creatures from prehistoric and modern DNA on the planet Menagerie.  He oppressively controls his creations who are in the middle of an attempt to liberate themselves from his control.  His genetic manipulations show no bounds as he has also experimented on himself.  Not fully understanding Doctor Crichton's motivations, or his ties to the mysterious group known as the Observers, Hawk initially befriends him.

NEANDEYETHAL
Neandeyethal is the leader of a group of Doctor Crichton’s creations who is trying to free his fellow creatures.  The Blinkers are forced to choose sides in Neandeyethal's rebellion and are soon fighting for survival as Doctor Crichton releases his most terrifying creatures to track down Neandeyethal and his rebels.

RABID MONGRELS
A horrifying amalgam of reanimated creatures, Doctor Crichton created the Rabid Mongrels as his enforcers that he uses to track down and deal with any rogue creations.  Unbeknown to the Blinkers, the Rabid Mongrels also carry a vile plague that could wipe out all life on any world it spreads to.
​